TBDBITL: A ‘history much bigger than me’

Read on to see how traditions move Band Director Christopher Hoch and trombone player Tori Mollenkopf, and get a taste of what it’s like to be in the middle of rehearsal with our interactive video. Spirit & Sports
Archie Griffin: ‘I still kind of get choked up’

The memories the two-time Heisman Trophy winner and Buckeye legend made within Ohio Stadium changed his life forever. Spirit & Sports
For many Buckeye scholarship students, the ’Shoe fit On Make the Band Night, marching band hopefuls dress in formal attire and gather in the rehearsal hall at Ohio Stadium. It’s past 10 on a Monday night. A five-day tryout process has just concluded.

“The energy in that room is absolutely electric,” says Tori Mollenkopf, a trombone player whose name has been called five times.

As Buckeyes mark 100 years in the life of Ohio Stadium, the band is marching for its 145th season. Mollenkopf represents a small chunk of that time, one that furthers a tradition she shares with her dad, David Mollenkopf ’93, and aunt, Amanda Howenstine ’04.

When she enters Steinbrenner Band Center and sees glass-encased memorabilia from years past, she’s honored that her era is represented with a drumhead from the 2018 Macy’s Thanksgiving Day Parade and another from the 2022 Rose Bowl.

“Getting to put on a uniform worn by so many generations of people before me is amazing,” she says. “It’s another step in being part of a history so much bigger than me.”

The band’s pregame performance drives that home for Mollenkopf. The 1928-era ramp entrance and Script Ohio, introduced in 1936, are mainstays of game day in the ’Shoe.

Her thoughts ran wild during her first ramp entrance as she worked to ignore the cheering of 100,000 fans around her. As the crowd roared, she focused on the cross belts of the marcher in front of her. She looked down every four steps to be sure she was hitting her mark. This interactive video shows what it’s like to be part of TBDBITL as it practices “Buckeye Battle Cry” in the Ohio Stadium Rehearsal Hall. Once the video starts, if you’re on a phone or tablet, move it around to change your perspective. If you’re on a computer, click and drag. (Video by Daniel Combs)

Mollenkopf’s time with the band is coming to an end this season, but she’s cherishing this fall’s eight home games. She’ll treasure memories like eating game-day lunches on B Deck with her bandmates or memorizing music on C Deck on chilly autumn evenings.

“It’ll be a huge day accepting the fact that it’s my last time marching in the stadium,” she says. “I really need to cherish this year and all the small moments, as well as the big ones.”

Gifts for a lifetime.

It’s the spooky-named tradition that fires up Buckeye fans before each home-game kickoff. Now, even if you’re not in St. John Arena, you can catch the Skull Session via livestream. Also on the Ohio State News YouTube channel: Hear from coaches and players, watch TBDBITL previews and sing along with the marching band. 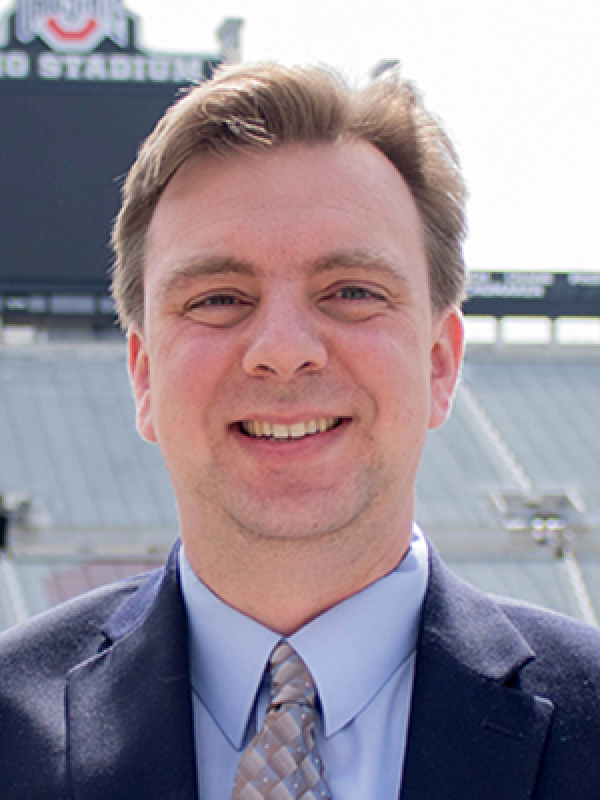 Ohio Stadium is an arena like no other, says five-time Ohio State grad Christopher Hoch, who has directed the marching band for the past seven years and was in its ranks as a trombone player in the late 1990s. As he prepped for this season, which features an extraordinary eight home games (and eight distinct halftime shows), he shared these thoughts.

On the ’Shoe experience

There is no place on earth like Ohio Stadium. I remember coming to this place as a child, 7 or 8 years old, and being thrilled by the ambiance, the atmosphere. It’s close in terms of the crowd being right in those stands, right on top of you. The sound they make when the football team or band do something well, it’s incredible.

On the ramp entrance

Being able to march down that ramp, that’s part of the structure of the stadium. There were very few groups marching at such a tempo and high step. Band members are moving at about a 15-degree angle down the ramp at three beats per second. It’s a sight to behold.

On the band family

The alumni band reunion is amazing. We get 400 to 700 alumni back to perform the ramp entrance and halftime show with us — enough people to do four Script Ohios. I remember as a student when alumni took the field. The camaraderie is remarkable. Coming back is a chance to see all those wonderful people, to be a part of that band family.

By giving today, you can help keep talented young students marching along with TBDBITL. Evan Drexler is a communications manager for the Ohio State College of Arts and Sciences who leads public relations and communications for the university’s marching band. He lives in Grove City with his wife, Emily. Monica Torline DeMeglio ’02 is a content strategist for Ohio State, where she studied journalism and edited for The Lantern. She was a reporter and editor for 10 years, working in newsrooms in Ohio’s small towns and California’s sun-drenched desert. She is a forever fan girl of Chuck Taylor All-Stars, her 1997 Rose Bowl sweatshirt and great storytellers of any age. Ohio State pushes the boundaries of how we drive and prepares the next generation of auto pioneers to go even further.