How these veterans make us proud to be Buckeyes

Ohio State has been making space for cadets and veterans since its earliest days, and these stories show why. Ohio State’s ties to the military date back to its earliest years: The first recorded classes in military tactics and drill were held in 1874. And Ohio State’s commitment to veterans continues: In recent years, we have been named one of the best universities for veterans.

In observance of Veterans Day, we are sharing stories about veterans whose service exemplifies Ohio State values.

A portrait of the late Hugh Wylie ’42 at the entrance to Ohio State’s Army ROTC shooting range in Converse Hall had intrigued Frank Blacksher ’93 since he arrived on the Columbus campus in 1989. He knew only that Wylie was an Army artillery officer killed in World War II — and that heroics no doubt were behind the naming of the range for him in the 1960s.

An Army artillery veteran himself, Blacksher couldn’t shake a yearning to know more about this fellow Buckeye. So 15 years ago, he and his wife, Diana, spent eight hours combing through Wylie’s official military file at the National Archives Records Administration in St. Louis.

Handling fragile documents and artifacts with white cotton gloves, the Blackshers found, among other items, Wylie’s Ohio State transcripts and a telegram notifying Wylie’s father, an Army major, of his son’s death. He consulted the Makio yearbook and other sources for additional details.

He learned Wylie was born Nov. 30, 1921, in Columbus. Wylie earned an Ohio State business degree and, upon his graduation six months after the United States entered WWII, the commission of second lieutenant. He participated in ROTC for four years, was a member of the military honorary Scabbard and Blade and mentored youngsters at the YMCA.

Following his training, Wylie was assigned to the 82nd Airborne and served in North Africa. He became executive officer of the 376 Battalion’s Alpha Battery and took part in D-Day.

On Sept. 17, 1944, while stationed at Leicestershire, England, his unit left the airport at 11:15 a.m., flying across the North Sea to The Netherlands. They encountered light shrapnel and small arms fire from German artillery. With his battalion, he jumped into Groesbeek Sector.

About 2:30 p.m., Wylie died of a hand grenade blast while directing the assembly of his men and equipment. He was the only member of Alpha Battery killed on that first day of the Battle of Arnhem. He earned a Purple Heart, European-African-Middle Eastern Campaign Medal, World War II Victory Medal, French Fourragere, Netherlands Orange Lanyard and Parachutist Badge. He is buried in Columbus’ Green Lawn Cemetery.

“The plain gray marker shows the wear of the years. It has no markings identifying military service,” Blacksher says. “I was stunned to see it was just about 200 feet from my mother’s grave.

“Each day I feel grateful for the ultimate sacrifice he made for our country.” — Grace Miller ’21 and Mary Alice Casey

A lot can change in a classroom over a 15-year span, but U.S. Air Force Lt. Col. Emily Kubusek ’06 believes the lessons many students in ROTC programs want to be taught remain timeless.

They want to learn about more than the topics in lesson plans, Kubusek says. They want to hear opinions on those topics. They also want to hear about instructors’ real-time experiences applying the lessons.

That’s what Kubusek, who has spent a decade and a half in the Air Force, hopes to provide students in her return to campus. In August, she began a two-year tour as an operations flight commander and assistant professor of aerospace studies for Ohio State’s Air Force ROTC program.

Kubusek, who earned a bachelor’s degree in aviation management, recalls what it was like when she was the one sitting in class quizzing instructors on the challenges they had faced in the line of duty. Now the pupil is the teacher, and Kubusek is tasked with instructing seniors who are on the cusp of their Air Force commissions. “We teach lessons in order to give them the background and facts. A lot of time we give them the information, and they have to figure out how to go forward with that information,” Kubusek says. “But you want to know what people think. You want to know what their experiences were like and how they affected them. I’m anticipating the personal stories to go over really well and for them not to just answer questions on the content, but to go deeper.”

Unlike civilian instructors, who may or may not have real-world experience in their fields of expertise, ROTC teachers are active-duty members, Kubusek notes. She recalls the excitement of learning from her detachment commander, Col. Mike Huhn, in the mid-’90s at Ohio State.

“He was a pilot, just like I wanted to be,” Kubusek says. “He was animated, transparent and truthful. That really resonated with me. His experiences showed me who I could be and what I could become.”

Kubusek has logged 1,383 combat hours in KC-135 aircraft, which refuel fighter planes at 30,000 feet. “We are a flying gas station, if you want to think of it like that,” she says. Kubusek cherishes being part of a “crew” that works in unison toward a common goal. The refueling tankers allow fighter planes to continuously provide cover for soldiers on the ground.

“Being part of the whole chain is exhilarating,” Kubusek says.

The Wisconsin native also has a distinguished military family history. Her father, Dennis, enlisted in the Air Force during the Vietnam War. Her grandfather, Stanley, was an infantryman in World War II, arriving on Omaha Beach three days after D-Day and earning a Purple Heart.

Her own story is an example of how the military has changed since she was a student. As of last year, 708 of 10,964 Air Force pilots, or about 6.5%, were women, according to Air Force Magazine. Kubusek says the most recent figure she’s seen is closer to 10 percent.

A year ago, the Air Force discarded its decades-old height standards, which had disqualified nearly half of female candidates, according to a Washington Post report. The revised guidelines are part of an effort to eliminate gender-based obstacles in a service whose leadership and pilot corps are overwhelmingly male.

“I totally believe people need to see who they can become,” Kubusek says. “So, if by seeing me, a young woman who never thought she could become a pilot, gives it a try, I’ve done my part.

“I feel a great responsibility to represent my gender well and show the next generation of women who they can be. It’s nothing I can’t handle.” — Tom Reed 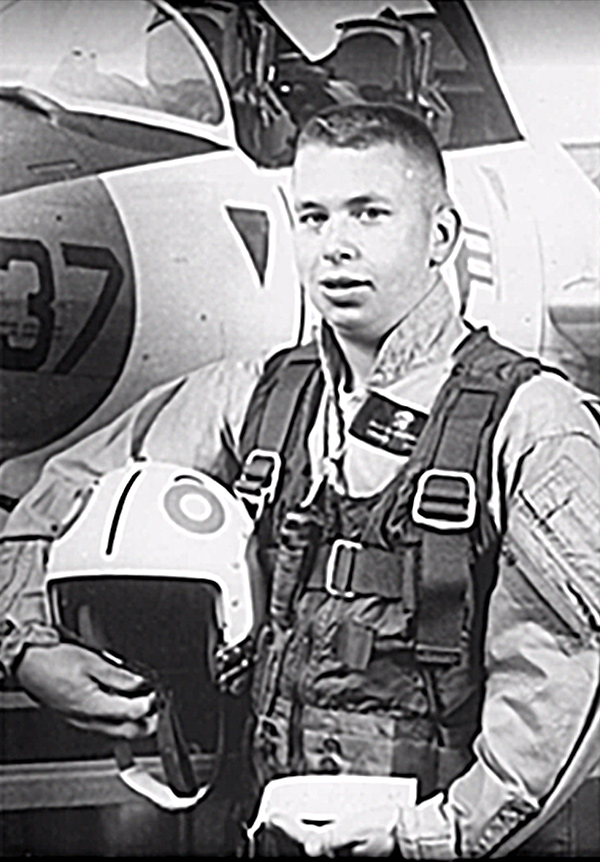 Barb Aman recalls the swell of pride she experienced when seeing her brother accept his Ohio State diploma during a commencement ceremony in the spring of 1966.

Leonard John Schoeppner — known to many as Jack or by his Navy call sign, Chops — had been the first member on either side of his family to attend college, graduating with a degree in ceramic engineering. His younger sister knew him as an ambitious, adventurous goal-setter. Schoeppner had attended Ohio State on a Navy scholarship, participating in the campus ROTC program knowing he likely would see combat in the escalating war in Vietnam.

“Jack wanted to be a pilot,” Aman says. “He had to give back four years to the Navy [for his scholarship] and his feeling was, ‘I might as well do what I want to do and be what I want to be,’ and that was to become a pilot.”

Schoeppner, who rose to the level of lieutenant, never came home from the war. He went missing in action, along with his flight navigator, aboard an F-4 Phantom fighter on March 9, 1970, while on a reconnaissance mission over the Gulf of Tonkin. There was no flag-draped coffin for his family to receive. No remains were found.

After decades of grieving, the pride that 16-year-old Barb experienced that day in Columbus has returned in a most unexpected way. Schoeppner will be honored posthumously at a Nov. 13 ceremony at MAPS (Military Aviation Preservation Society)Air Museum, adjacent to Akron-Canton Airport and not far from where he grew up. A restored F-4 Phantom, bearing the names of Schoeppner and his navigator, Lt. j.g. Rex Parcels Jr., also will be dedicated.

“For the first time, it feels like he’s coming home,” Aman says of her brother.

The event provides a bit of closure for Aman and her surviving brother, Richard. It’s also allowed friends to share stories about a blond-haired serviceman remembered for his quick wit and thrill-seeking nature.

College fraternity brother and hunting buddy Bill Lieser ’66 recalls how Schoeppner would strip old cars until nothing except the frame and engine remained.

“They would be like dune buggies,” Lieser says. “Jack would ride them around old strip mines and gravel pits. He was always looking to have a good time.”

The story of how Schoeppner and the restored F-4 Phantom became part of the same ceremony is remarkable. Valerie Kinney, a coordinator for the MAPS board of directors, says the old gray plane had been sitting on MAPS Air Museum tarmac for about a decade. A few years ago, Richard Schoeppner was attending a MAPS function when he mentioned the fact his brother had flown such an aircraft in Vietnam while aboard the USS Ranger.

Not long after Schoeppner’s death, the Navy had returned his belongings to the family — medals, certificates, a leather jacket, letters from home, a high school class ring from Canton Central Catholic and a flight logbook. When the family and Kinney began combing through the flight log, they made a startling discovery. Schoeppner had logged 18.3 combat hours on the very F-4 Phantom that was sitting on the MAPS tarmac.

Schoeppner’s belongings, including his leather bomber jacket, will be displayed in a case in a MAPS room dedicated to MIAs and POWs from the Vietnam War. It will afford nephews and nieces who never met Schoeppner a chance to connect with their uncle.

“We are very grateful,” Aman says. “It will be a great place where family and friends can come and remember his service.” — Tom Reed Grace Miller is an assistant marketing manager for Scott’s Miracle Grow in Columbus. She worked two years for University Marketing while pursuing her degree in marketing, with minors in history and environmental issues. Tom Reed is a writer working in higher education. A former sports writer and podcast host, he spent 30 years writing for The Athletic magazine and metro newspapers in Ohio. Taylor Gruenwald ’16, who turned the renovation of her childhood home into a TikTok hit, has never met a space she can’t transform.