Buckeye great Rex Kern is, in a word, grateful

The legendary quarterback offers stories about life, football and friends in his new book and, in an accompanying story, reflects on a battle-scarred keepsake.

Rex Kern speaks about his new book during a recent visit to Central Ohio. (Photo by Jo McCulty ’84, ’94 MA)

Rex Kern is a mythical name in Ohio State football history, yet he’s always talking about others and how they helped, taught and shaped him.

Now the Buckeye legend has put those words on pages, too, in a new book, The Road to the Horseshoe and Beyond: How a Small-Town Athlete Benefited from Ohio State to Build a Life, which he co-wrote with Lee Caryer.

Kern ’71, ’73 MA, ’83 PHD considers his book a thank-you to those who influenced him while growing up as a three-sport all-state athlete in Lancaster, Ohio; during his time as a student-athlete at Ohio State; in his four NFL seasons; and later throughout his life and business career. 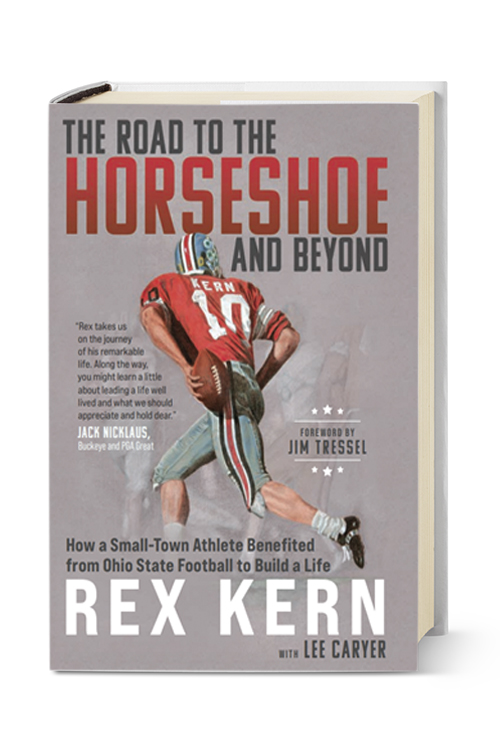 “Having good mentors has been a huge part of any and every success I have had,” Kern writes in the book.

Buckeye fans will enjoy football tales from Kern’s legendary career. Ohio State went 27–2 in his time as starting quarterback, including his sophomore season, when the undefeated Buckeyes won the 1968 national championship under Woody Hayes.

However, readers also will learn much more about Kern — who lives in Greenwood Village, Colorado, with his wife of 50 years, Nancy — and his heartfelt appreciation for others. The book offers moving reflections on faith, race, leadership and mentoring.

Here are a few excerpts:

Kern recalling how Hayes approached life after his career as the Buckeyes’ head coach ended in December 1978:

We saw the best side of one of the most important men in the lives of every player he coached, whether at Denison, Miami (O.) or Ohio State. Freed of his perceived need to control, dominate, intimidate and manipulate to maintain and expand his position of power, Woody excelled when he lost his power. With a base of operations but no need to try to improve the fullback off tackle play, he had time to remind his players to finish their degrees, provide counsel as requested, ask about their wives and children, teach military classes, do the public speaking he loved, chair fundraising drives for important causes, chat with students and simply be a kindly old grandfather to anyone who needed that type of man in his life. And don’t we all?

His final and most powerful memory of Hayes:

Because he was frail and unsteady, I got out and went around the car to help him get out. I said, “Coach, I want you to know how much I love you,” and kissed him on the cheek. He smiled and said nothing.

Kern’s advice about leadership, gathered from his experiences in athletics, in business and as a husband, father and friend:

My first thought is that people do not begin as leaders. Those who do make so many mistakes they are fired or replaced quickly. Good leaders have a great deal to learn before they can begin to lead at any level. Mistakes will happen, and they are wonderful means of acquiring knowledge and experience, but life is too short to learn only by making your own mistakes. Sound decisions come from knowledge and experience, but no one begins with experience. When you start learning about a subject, find people who know more than you do and learn from them. And not just a few people — find a bunch!

His reflection on friend and former teammate Jack Tatum, who told a crowd at a team banquet after their junior season that Kern was “a man who treats everybody right.”

Many years later, in 2003, “Tate” called when Nancy and I were living in Ventura, California. He had diabetes and had had an operation to remove all five toes on his left foot.

“Rex, my daughter Jestyn is playing basketball at Santa Barbara City College and I was hoping you and Nancy could check on her from time to time,” he said. “In fact, she’s got a tournament at Ventura College this weekend.”

I replied, “Tate, we will be at the game and introduce ourselves to her.”

We met Jestyn that weekend, and she reported to her father.

By Rex Kern, As told to Todd Jones

I wore this helmet my senior season of 1970, my third as the Buckeyes’ starting quarterback.

Now it’s in a clear plastic case in the den of our home in Greenwood Village, Colorado. It has always been something I wasn’t going to let out of my possession.

Oh my goodness, I get hit by a swarm of emotion when I think about what this helmet means to me.

Look at the marks and scratches on it, the paint colors from opponents’ helmets and the ripped Buckeye stickers. Those are battle scars. When I see this helmet, I think of how a lot of guys battled with me and for me, and how they believed in me.

This helmet makes me think of all my teammates and coaches, and the ones we’ve lost through the years. Those are relationships you can’t put any amount of money on.

And those Ohio State relationships aren’t just in football.

I saw myself more as an athlete up through my freshman year of college. But then I made a concerted effort to work at it academically. I was able to attract people who saw something in me, and they supported me. Academics became important to me.

People always identify me as a football player, but I have three degrees from The Ohio State University. Those three degrees mean a great deal to me.

Tell us what you treasure

Do you have a keepsake tied to Ohio State that you can’t part with? It might be a great candidate for The Object, a regular feature in the Ohio State Alumni Magazine print edition. Send us a photo and the tale of your keepsake and we’ll consider it for a future issue.

Email us a photo

Todd Jones is a senior writer for Ohio State Alumni Magazine and host of One Degree Greater, a podcast about young alumni. He spent three decades as a newspaper reporter, including 20 years at The Columbus Dispatch. You can usually find him with his face in a book or taking long, old-man walks through nature.

Our Alumni
How painting helped him cope with OCD

Former tennis player Jeff Sparr is dedicated to helping others build mental wellness through creativity, just as he did.

Just part of the reason: The ceremony was the only one held at the ’Shoe in its centennial year, says Molly Ranz Calhoun.