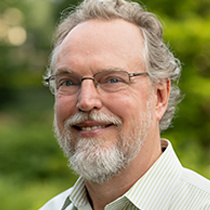 Todd Jones has been a senior writer for Ohio State Alumni Magazine and University Marketing and Communications since 2017. He also served as host of the Ohio State podcast “One Degree Greater,” featuring Buckeyes in their first years after graduation.

Todd spent three decades as a newspaper reporter, including 20 years at The Columbus Dispatch, and has received more than 50 national, state and local journalism awards. He reported on stories from Australia, Greece, Scotland, Japan and nearly every major U.S. city while covering events such as Hurricane Katrina, the Olympics and two Ohio State football national championships. His work has appeared in numerous publications, including The New York Times and Los Angeles Times.

You can usually find Todd with his face in a nonfiction book, listening to all types of music, enjoying time with his wife, Deb Bertsch, or having yet another fashion faux pas corrected by his two young-adult daughters.

Our Alumni
This family will tell you: One blind date started it all

Or maybe it was the scholarships. Either way, the result is 10 Buckeyes, 13 degrees and a special love for Ohio State.

She talks about helping students, teaching financial literacy, fall highlights and the toughest times of her life.

Our Alumni
With his whole heart

Howard M. Johnson found love, a passion for science and a bright future — all on a campus hundreds of miles from home. With generosity, he and his late wife are lighting the way for others.

Campus & Community
This storyteller’s No. 1 priority is listening

Leticia Wiggins ’11, ’13 MA, ’16 PhD dedicates herself to authentically reflecting the Ohioans who enrich our community.

Our Alumni
The man behind CAPA’s curtain shares a day