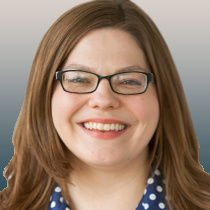 Shelley Mann ’03 has been a freelance writer for Ohio State Alumni Magazine since 2018. She’s a 2003 graduate of Ohio State University, where she earned a degree in journalism and served as editor-in-chief of The Lantern.

Shelley spent 10 years as a newspaper and magazine reporter and editor, including six years at The Dispatch Printing Co., where she served as editor of Columbus Alive and Crave magazine.

She lives in Berwick with her husband and two daughters, and when she’s not writing, she’s probably reading, gardening, crossword puzzling or collaging.

She talks about helping students, teaching financial literacy, fall highlights and the toughest times of her life.

Our Alumni
With his whole heart

Howard M. Johnson found love, a passion for science and a bright future — all on a campus hundreds of miles from home. With generosity, he and his late wife are lighting the way for others.

Our Alumni
This family will tell you: One blind date started it all

Or maybe it was the scholarships. Either way, the result is 10 Buckeyes, 13 degrees and a special love for Ohio State.

News You Can Use
A guide to conquering the digital world

These strategies can help keep the computers and devices that dominate our days from dominating our minds.